“Look, Your Worshipfulness, let’s get one thing straight. I take orders from just one person: me.”

Han Solo took an unlikely path to becoming a general of the Rebel Alliance. After years of looking out for himself and his ship as a smuggler, it took meeting Luke Skywalker and Leia Organa to convince Solo of the worthiness of the Rebels’ cause. Although he may be an unconventional leader, Solo has proven himself an effective field commander, and soon, Han Solo will be able to lead your Rebel troopers and vehicles into battle with the Han Solo Commander Expansion  for Star Wars™: Legion.

The Han Solo Commander Expansion includes everything Rebel leaders need to add Han Solo to their Star Wars: Legion armies as a commander. Alongside a single unpainted and easily assembled miniature depicting Han Solo readying his trusty DL-44 Blaster Pistol, you’ll also find a unit card outlining Solo’s abilities and three command cards that let you make use of his unorthodox leadership style. Finally, rounding out the expansion are three upgrade cards that unlock even more potential in Han Solo or your other units.

We're also excited to announce that Star Wars: Legion is now compatible with the Star Wars Dice app for your Android or iOS device! You'll now be able to quickly and conveniently select and roll the custom eight-sided dice representing the blaster fire and other attacks your units launch against the enemy and the custom six-sided dice that determine if your troops can dodge these attacks.

Pre-order your copy of the Han Solo Commander Expansion at your local retailer or online through our webstore today. Then, read on for a closer look at Han Solo’s unique brand of leadership! 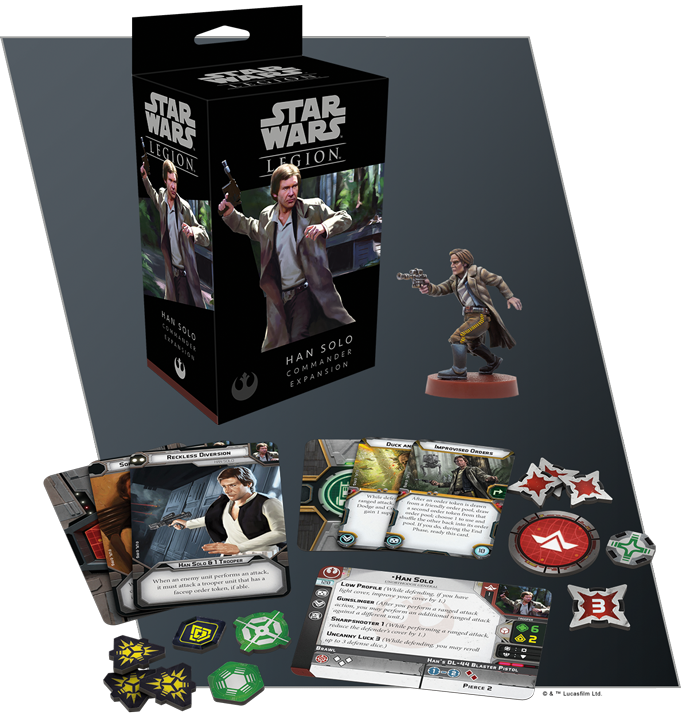 As the Rebellion’s third Star Wars: Legion commander, Han Solo completes the trio of heroes from the classic Star Wars trilogy, providing another option for the commanders you can add to your army. While he may not be able to tap into the Force like Luke Skywalker or have the natural leadership abilities of Leia Organa, Solo still fills a unique role in battle, leading his troops with the same bravado that made him one of the best smugglers in the galaxy. At 120 points, Han Solo falls directly between his fellow commanders in terms of cost and likewise provides a blend of offensive capabilities and unique tactical options.

Lacking the polished tactical training of many other Rebel leaders, Han Solo instead relies on his ability to improvise and his skill with a blaster to bring him success in battle. If there’s anyone that knows the value of a good blaster, it’s Han Solo, and as you’d imagine, he’s almost unrivaled when attacking with his DL-44. The blaster pistol packs quite a punch up close, granting Han two red attack dice. These dice already give his shots a good chance of hitting, but his Sharpshooter 1 ability makes this even more likely, mitigating the effects of whatever cover Solo’s target might be hiding behind. Perhaps most impressive, though, is the speed at which Han Solo can fire. As a Gunslinger, he can immediately perform a ranged attack against a different unit after performing a ranged attack, giving him the chance to deal with two threats at once.

But doling out damage is far from Han Solo’s only talent. He also has a surprising knack for avoiding damage. While his Low Profile improves his cover, you don’t earn a reputation like Han Solo’s without a little luck. Although he may roll the weaker, white defense dice, Han Solo’s Uncanny Luck ability allows him to reroll up to three of these dice, increasing his chances of coming out of an engagement without a scratch. 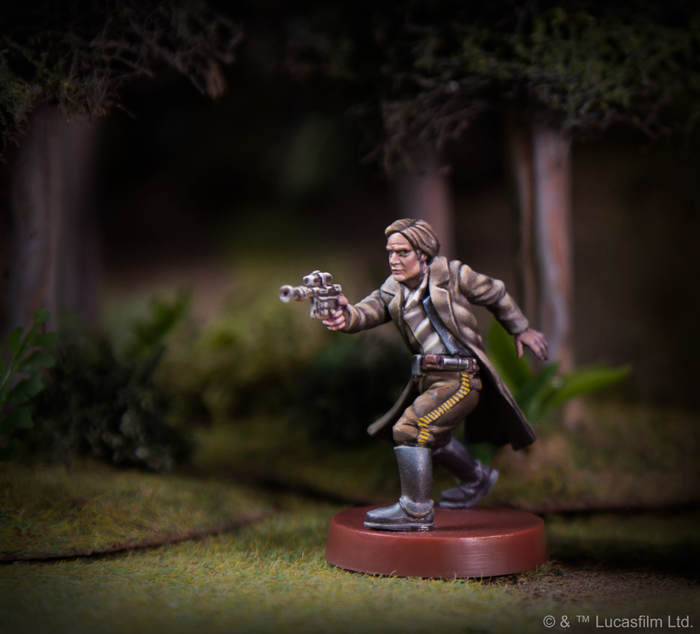 Han Solo is certainly a force to be reckoned with on the battlefield, but he can’t take on the entire Empire himself. He still needs to command the other Rebel forces, and he brings his own bold style of leadership to this task. Where most commanders attempt to think several moves ahead, Solo tends to rely on his instincts and react as the situation evolves. As a result, Han Solo’s three command cards reflect his penchant for thinking on the fly. 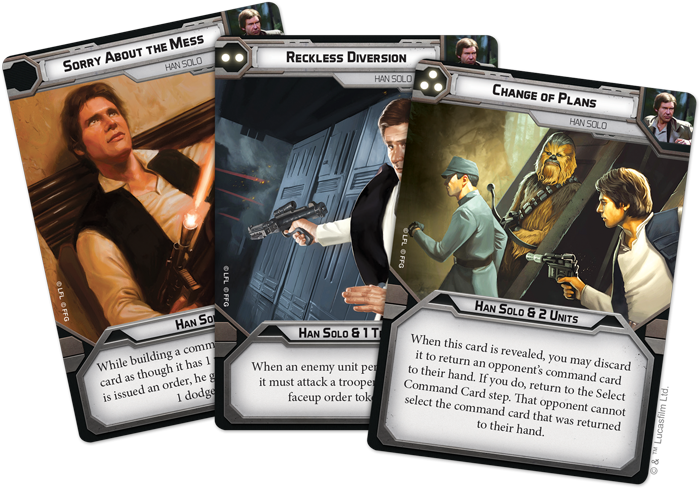 For instance, Sorry About the Mess guarantees Han Solo will be able to make the first move and get the jump on his opponents. With no pips in the upper left corner, this command card lets Han Solo get out in front of even the fastest cards like Ambush  or General Veers' Maximum Firepower, and the aim and dodge tokens he gains from it ensure that he’s ready for anything.

Still, even Han Solo needs to issue orders to other units and his Reckless Diversion card proves that he’s willing to put himself in harm’s way for those under his command. With this card in play, Han Solo and another trooper unit can draw enemy fire away from your other units, giving them time to launch their own assault or scurry away with a critical objective.

Finally, if the battle is taking a turn for the worse, Solo is not afraid to call for a Change of Plans.  Normally, players select a single command card that defines their strategy for an entire round. Change of Plans, however, allows you to return your opponent’s selected command card to their hand and forces them to select a different one. Not only does this disrupt your opponent’s strategy for the round, it could also save you from powerful card effects, such as having to face Darth Vader twice in a round thanks to Implacable. 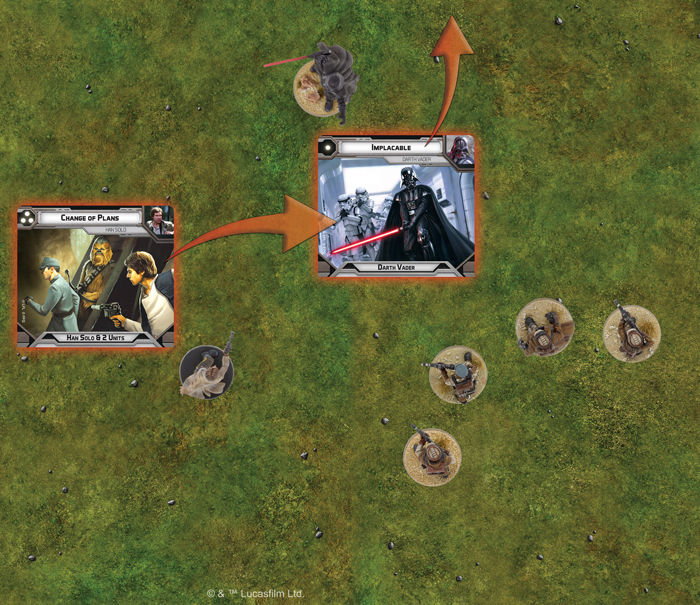 Han Solo's Change of Plans command card forces the Imperial player to return Implacable to their hand, sparing the Rebels from seeing Darth Vader activate twice this round.

On top of the commands he issues in the field, Han Solo can also be equipped with three new upgrades that make him all the more effective. Gear like  Emergency Stims  can help keep Han Solo or another unit in fighting shape for another full activation after they would normally be eliminated. Similarly, some of this damage could be negated if you use Duck and Cover to gain a suppression token during the Apply Dodge and Cover Step of a ranged attack. Even though this token could interfere with your later activations, it will raise your cover, helping avoid damage in the short term. Finally, you can always lend a unit with an open Command upgrade slot a bit of Han Solo's impromptu style with the ability to create Improvised Orders,  drawing two tokens from the order pool and choosing one to use.

Despite his unconventional approach and gruff demeanor, Han Solo became one of the most iconic leaders of the Rebel Alliance. Recruit him to your cause and fight the tyranny of the Empire!