June, 1944, the storm of war descends upon the beaches and fields of Normandy as the Allies seek to roll back the walls of Fortress Europe. On the western flank of the invasion, American forces push off from Omaha and Utah and begin rolling into the countryside of France. Leading the way are the Tanks and Troops of the US Armoured divisions; a highly mechanized, highly deadly fighting force that would go on to be instrumental in the hard fighting to come. 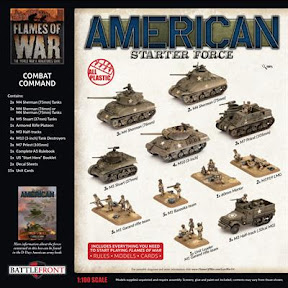 In the box you get:

-5 M4 Sherman tanks, these can be built as 75mm or 76mm variants;
-3 M5 Stuart light tanks which are excellent as a fast moving cavalry vehicle;
-4 M10 Tank destroyers, these will be helpful in dealing with the bigger German Panzers;
-3 M7 Priests, I never leave home without some artillery;
-1 Armoured rifle platoon and its 5 halftracks, one of, if not the, most useful infantry units in the game, more on that below;
And the usual assortment of decals, rules, and cards

This gives you an excellent starting point for D-Day Americans of 75 points, and gives you pretty much all the units you need to have a balanced force that will teach you most of the rules of the game. Lets take a closer look at the units themselves and talk about their strengths and weaknesses

Shermans, the quintessential western allied tank of the second world war. Tens of thousands were produced of all variants throughout the course of the war, and it's often considered by many to be the best all around tank of the period. How does that translate over to our game? 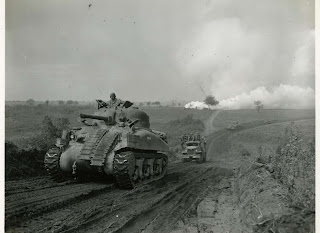 Well it is a moderately armoured fighting vehicle, front armour is 6 and side 4, sporting a decent 75mm cannon that punches with an AT of 10. On top of that, the M4 brings excellent mobility to the field, being able to tactical 10” while maintaining a cannon rate of fire of 2 thanks to its stabilizer. Of course, the downsides to the Sherman are part and parcel with its strengths, despite the decent armour, most contemporary German panzers feature weapons with AT 11 or higher, while AT 10 can often fail to punch through the stronger frontal plates of the Panther and Tiger. And while the stabilizer does offer more effective mobility, the trade-off is a +1 to hit while on the move, making Panzers in concealment that much harder to hit. 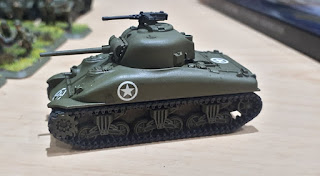 Of course, the kit also comes with options to build your M4s with the 76mm cannon option, sporting an increased AT of 12, a slightly higher front armour, and an improved remount rating, this Sherman variant will be an excellent boost to your armoured strength. Its downsides come as a lack of HE shells, a higher points cost, and with D-Day Americans, the ability to only take one platoon per formation 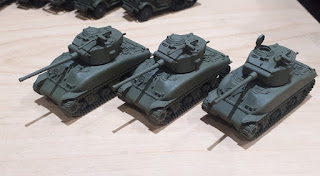 Next up we have the light M5 Stuart, featuring low armour ratings of 4 front and 3 side, and a low caliber cannon only capable of AT 7, you might find yourself asking how to utilize them? Of course they won’t last long if going toe to toe with even a Panzer III, their true strength lies in their speed and their MGs. With a tactical 12” and a cross value of 3+, you will not have a hard time moving these up a covered flank in order to harass dug-in enemy grenadiers, or artillery assets. Of course, if the German player opted to bring nothing but armoured vehicles, then the AT 7 of the tanks 37mm cannon will cause them headaches if fired at flanks, or lightly armoured vehicles like Wespes and Hummels. 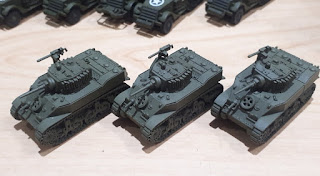 M10 Tank destroyers, an excellent answer to the issue of the M4s low velocity 75mm cannon. While sporting relatively low armour like the M5’s, Front 5 and side 2, this SPG’s 3 inch cannon is capable of the same penetrating power of the 76mm on the upgunned sherman chassis. But this comes at a much reduced points cost. And while it lacks a stabilizer and HE, they come with the special rule Seek, Strike, and Destroy rule. This allows them the ability to attempt a Shoot and Scoot order if they successfully pass a Blitz order early that turn. Granting them the ability to move in and out of sight, while not incuring the +1 penalty of the stabilizer. 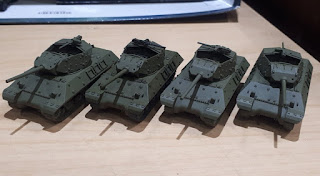 M7 Priests, ah yes, Artillery. Both the boon and bane of my existence when training with the Infantry reserve here in Canada. Likewise whenever I play Flames of War, good artillery support, or its lack, can make or break your strategy. The ability to effectively pin down, and shift dug-in troops from a position is one of the most vital tools to have in your arsenal, and not much in the game can do it better than American 105mm guns. Featuring the Time on Target rule, which grants your guns the Brutal keyword on a successful first range in attempt, and carried around in the reliable, if lightly armoured, Priest chassis, the M7 is my go to Allied mobile artillery vehicle. It even has the ability to lay smoke to cover my advance and sports an M2 .50 Cal MG for close defense (The Americans Really like their .50s) Never leave home without at least one unit of these! 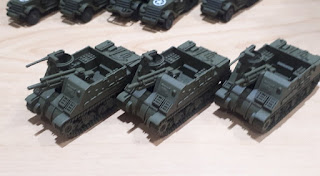 Lastly, for me honestly these are the star of the set, the US Armoured Rifle Platoon. 6 M1 Garand Rifle teams, 5 M1 Bazookas, 2 M1919 LMGs, 1 60mm Mortar, 2 M3 Halftracks with .50s HMGs and 3 M3 Halftracks with .30 MMGs, the Armoured rifle platoon is essentially a self contained army and is capable of outputting firepower equal to a force twice its size. With the ability to rapidly maneuver thanks to its integral halftracks (mobile Machine gun nests if you ask me), perform its own light artillery bombardments, fend off most tank of halftrack assaults with 5 Bazookas, and with enough teams to drive home most assaults, there really isn’t much to not love about this unit. The obvious downsides are the high unit cost, and the lightly armoured nature of the halftracks themselves, but with clever maneuvering you should be able to get to grips with the enemy before that becomes an issue. 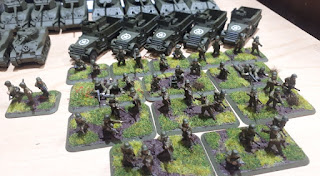 Every option in the kit is done in the excellent Battlefront plastic, making assembly relatively easy and hassle free (for those of us that have enjoyed the resin halftracks, you will definitely appreciate the new plastic kit for them), and if you do run into issues, Battlefront has the usual excellent assembly guides hosted on their webpage.

One of the best parts about the starter sets that Battlefront have been putting out are the included unit cards, these allow you to get right into the action without needing an additional purchase of an army book.

The set contains a card for each unit, with its stats and special rules, as well as for the formations you can build with the units. Retailing at USD $110, this is an excellent entry or expansion to the US forces during Operation Overlord. 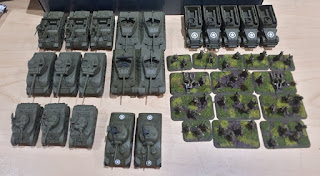 Find it here at Tistaminis
And save 5% with Code LFG5
If you enjoyed this review, make sure to follow Jacob's Youtube channel:
https://www.youtube.com/channel/UCF5ghcoFybxZfosOpy7Yx-Q