An Introduction to Firefight: Second Edition | By Mantic Games

April sees one of the biggest game launches from Mantic since… well, a very long time! Firefight: Second Edition has been in the works for a couple of years now, and we’re extremely excited about finally getting it into your hands. After the success of Deadzone in 2021, we wanted to follow that up with an experience for those players interested in taking their sci-fi wargaming to the next level. More vehicles! More miniatures! And, most importantly, more dakka!

Over the coming weeks we will be delving deep into the rules of Firefight. We’ll be explaining how to build your squads, giving you a guide to the various factions and explaining why Firefight is going to blow your socks off with a missile launcher. So, make sure you bookmark this blog, because we’ll be adding all the various links and videos to this page, so you’ve got a one-stop resource for everything Firefight.

However, before we get to all that… what is Firefight: Second Edition? Well, read on to find out more.

Good question! Firefight is a squad-based, sci-fi wargame set in the distant future. However, this isn’t a dark, dystopian future where everyone is always fighting for their lives. This is a future where capitalism has run rampant and humanity’s grip on the galaxy continues to squeeze ever tighter.

Giant corporations, collected together under the umbrella of the Galactic Co-Prosperity Sphere (GCPS), grow rich on exploiting the natural resources of planets spread throughout the galaxy. In order to do this, they recruit sprawling armies to defend their assets… and wipe out the local population, should they become hostile.

And they do become hostile! Humanity’s inexorable journey across the stars has brought them into conflict with numerous alien races. Some – like the stoic Forge Fathers or aloof Asterians – can be bargained with, while others – such as the ravenous Plague or insidious Veer-myn – only understand violence.

These conflicts are represented in Firefight through epic skirmishes on the tabletop. Typically a game will feature around 40-60 miniatures, with a mix of infantry, airships soaring through the sky and tanks trundling across the battlefield. It has alternating activations, which ensures gameplay is dynamic and you never have to wait long until it’s your turn to roll some dice and starting blasting!

For Second Edition, we went back to the drawing board and we really wanted it to be easier to make the jump from Deadzone into larger-scale warfare. So, who better to lead the charge than Andy Sharp, chair of the Deadzone RC? A few years ago, during one of our Mantic Open Days, Andy demoed ‘Deadzone XL’ and the response was fantastic. Deadzone XL was a faster, more streamlined sci-fi wargame, which ultimately laid the foundations for Firefight: Second Edition.

The main things we want to achieve with Firefight include:

HOW TO PLAY VIDEOS

If you want to find out how Firefight plays, then make sure you check out our how to play videos below.

Not sure what faction is best for you? Just in case the answer ‘all of them’ isn’t good enough, we’ve got a handy intro to each faction.

Aloof, superior beings that are highly technologically advanced. Their armies are made up mainly of automatons, constructs controlled by Asterian pilots from orbit, keeping the Asterians largely safe from the consequences of war. Asterians are all about Balance, so a combined arms force is the ideal option. If the enemy finishes the game with the same number of ‘living’ models as the Asterian force, victory should be assured. Read more here.

The appropriately named Enforcers are the bully boys of the Warpath universe. So, what can you expect on the tabletop from these super soldiers? If you’re one of those fun-loving types who prefers getting your models on the table and pushing them around, rather than spending all your time painting the little blighters then this is the army for you. Arguably the most elite army in the game, you won’t need to spend too much time at your hobby desk before you’ve got yourself a fully battle-ready force up and running. Read more here.

Space dwarfs! For most people, that’s all they need to know about the Forge Fathers (and rightly so). But what do these chubby, little beardies bring to the table? Well… guns. Lots and lots of guns! In every form you could possibly hope for. Even their dedicated assault troops like the Thorgarim (who happen to be one of the best in the game at fighting face-to-face) bring a pistol with them, just to soften things up a bit presumably, before tenderising them with massive Forge Hammers! Read more here. 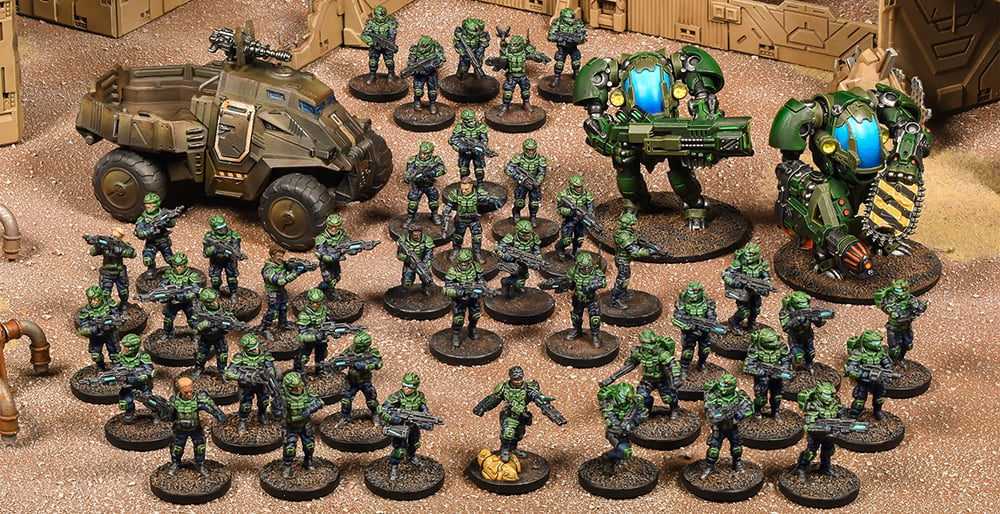 Hundreds or even thousands of marines are employed/deployed to help ‘convince’ local populations to agree to incorporation. But I’m not here to debate whether the GCPS are the good guys, or whether they’re faceless, greedy, genocidal tyrants that will destroy a planet’s inhabitants if they even threaten to disrupt the bottom line. I’m here to talk about the grunts, the guys who get the job done! Would you like to know more?

Marauders are incredibly suited to warfare in the Warpath universe, being able to sense the ebb and flow of a theatre of war and react accordingly. Their warfaring capabilities caught the attention of the various corporations, who hired battalions of Marauders to conduct their various operations. Until the Mandrake Rebellion that is. Read more here. 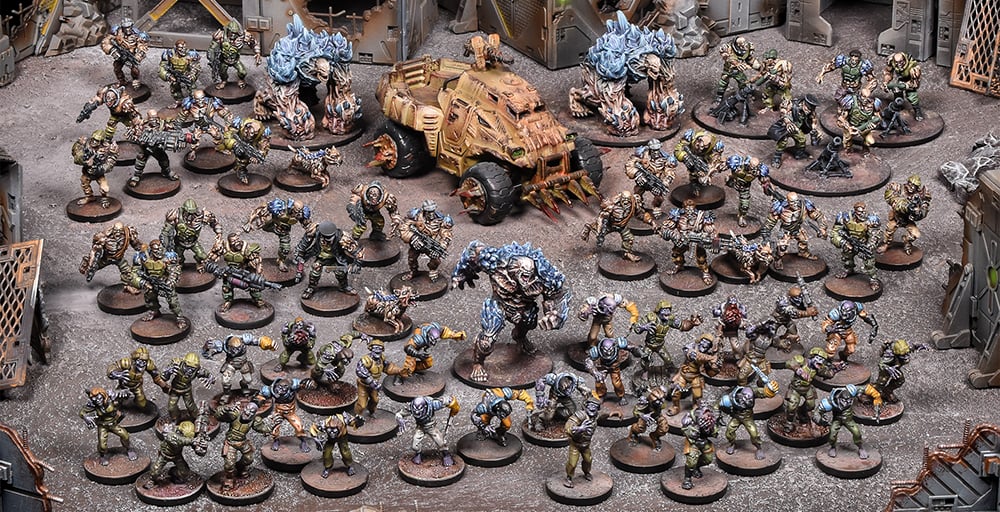 The Plague, an ancient threat that is becoming increasingly more resurgent in the galaxy, thanks to the ruthless expansion of the GCPS. Most races exposed to the Plague contagion will end up joining the Plague’s forces, or be killed by the monstrosities it creates. Some races mutated by the disease will keep their form – along with a rudimentary but savage intelligence – while others become horrific, towering monsters. On the tabletop then, you’ll be greeted by a mix of humanlike infantry, flanked by hideous beasts. Read more here. 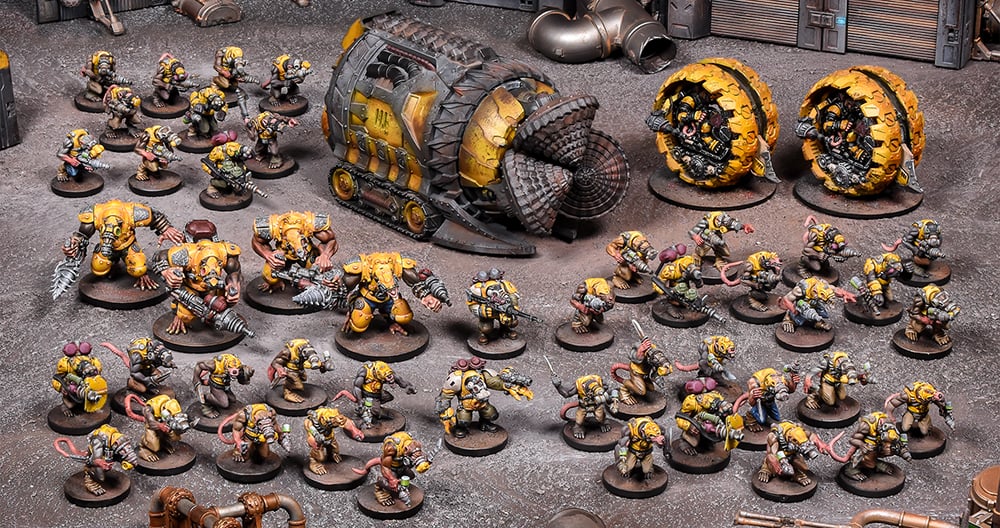 Not all the enemies of the GCPS are obvious or easy to find. Some are altogether far more insidious. Take the Veer-myn for example. It is said that you are never more than a few metres away from one, no matter where you stand in the GCPS. This is not strictly true. There are places mankind has colonised that even the Veer-myn would not choose to go. But there are nests of these rat-like aliens on almost every large starship and within most large colonies of sentient beings inside the five Spheres. Read more here.